Circle theorems: where do they come from?

In my opinion, the most important shape in maths is the circle. It’s so simple to understand, but it also gives us one of the most crucial constants in all of mathematics, p. Once we draw some lines inside a circle, we can deduce patterns and theorems that are useful both theoretically and in a practical sense. The defining feature of the circle is its constant radius, and I hope to show you that starting from this simple line, we can derive all the circle theorems you need to understand. Ready? Let’s go.

Firstly, we have to know how to construct an isosceles triangle from two radii. We’ll be doing this a lot, so here’s an example:

Since every radius is the same, drawing two radii forms a triangle with two equal sides – an isosceles triangle!

Now for the theorems:

2. The angle in a semicircle is a right angle

3. Angles in the same segment are equal

4. Opposite angles in a cyclic quadrilateral sum to 180°

5. The angle between the chord and the tangent is equal to the angle in the alternate segment 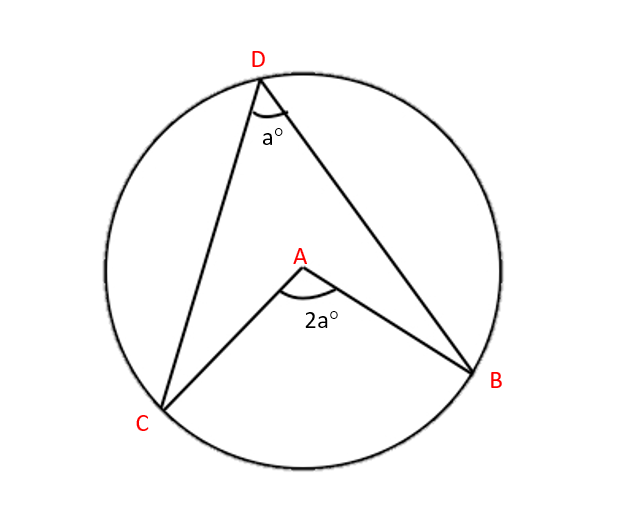 How do we show this? Start by drawing lines to connect A and D, and B and C. This forms three small triangles (∆ACD, ∆ABC, ∆ABD) and one big one (∆DCB). Since the lines AB, AC and AD are all radii of the circle, this means that the triangles ∆ACD, ∆ABD and ∆ABC are isosceles. 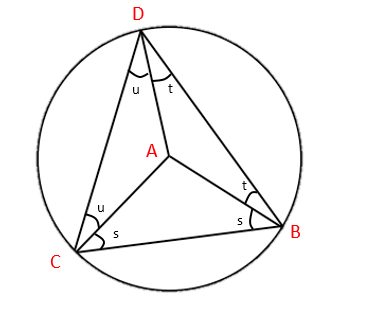 And we have in the larger triangle ∆DCB that:

2. The angle in a semicircle is a right angle: 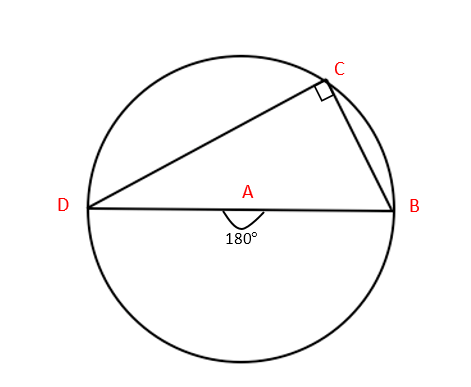 Firstly, we can see that this is an application of the theorem above, with angle at the centre = 180°. If we wanted to show this without using Theorem 1, start by drawing a line from A to C. Note that this is a radius of the circle. This makes three triangles: ∆ABC, ∆ACD and a large one, ∆BCD. We also have that ∆ABC and ∆ACD are isosceles. 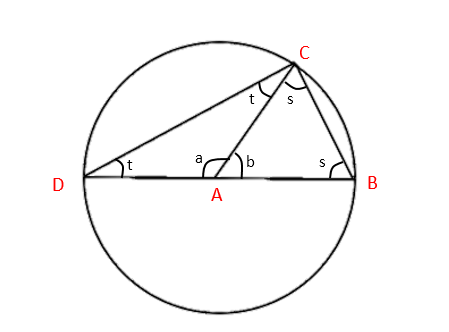 3. Angles in the same segment are equal:

4. Opposite angles in a cyclic quadrilateral sum to 180°: 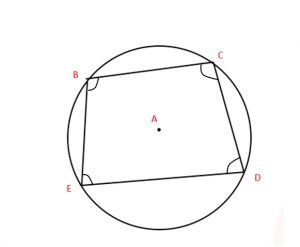 As before, the first step is to draw radii from the centre to each corner of the quadrilateral. This gives us four isosceles triangles: ∆ABC, ∆ACD, ∆ADE and ∆ABE. 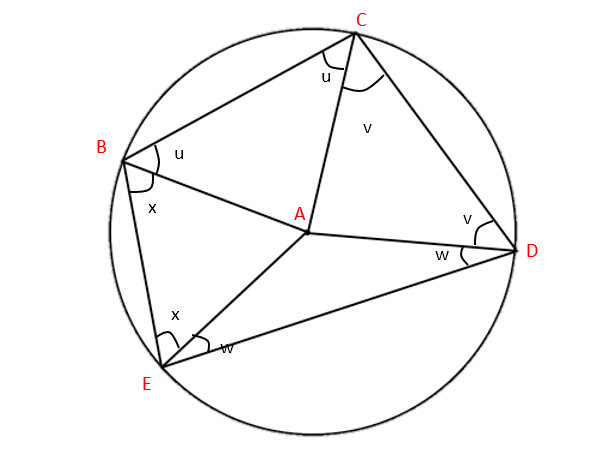 We know that the sum of the interior angles of a quadrilateral is 360° (if you’re not sure about this, think of a square). With this, we see:

5. The angle between the chord and the tangent is equal to the angle in the alternate segment: 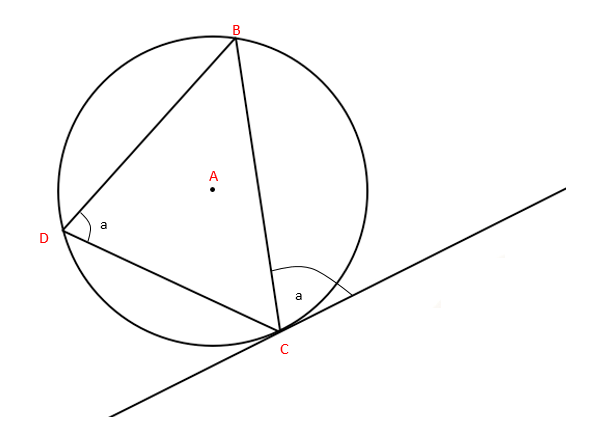 Finally, one of the more unexpected theorems we can derive from drawing lines in circles. The proof starts in the same way, by drawing radii from the centre of the circle to each of the points B, C and D. 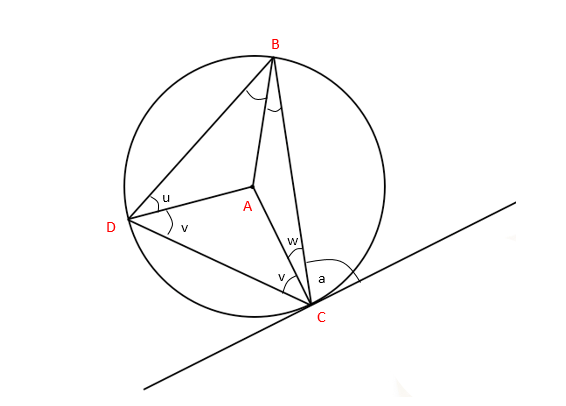 In the larger triangle ∆BCD, we know that:

We also know that:

I think it’s remarkable what drawing a simple radius can unlock for us inside in a circle. When I learned these theorems, I never really understood where they came from – now you do! Remember, while the questions may look complicated and it might be difficult to spot how to reach the answer, taking the time to apply these theorems will make your job a lot easier. And if you still need some help, then get a one-to-one explanation from an online maths tutor. 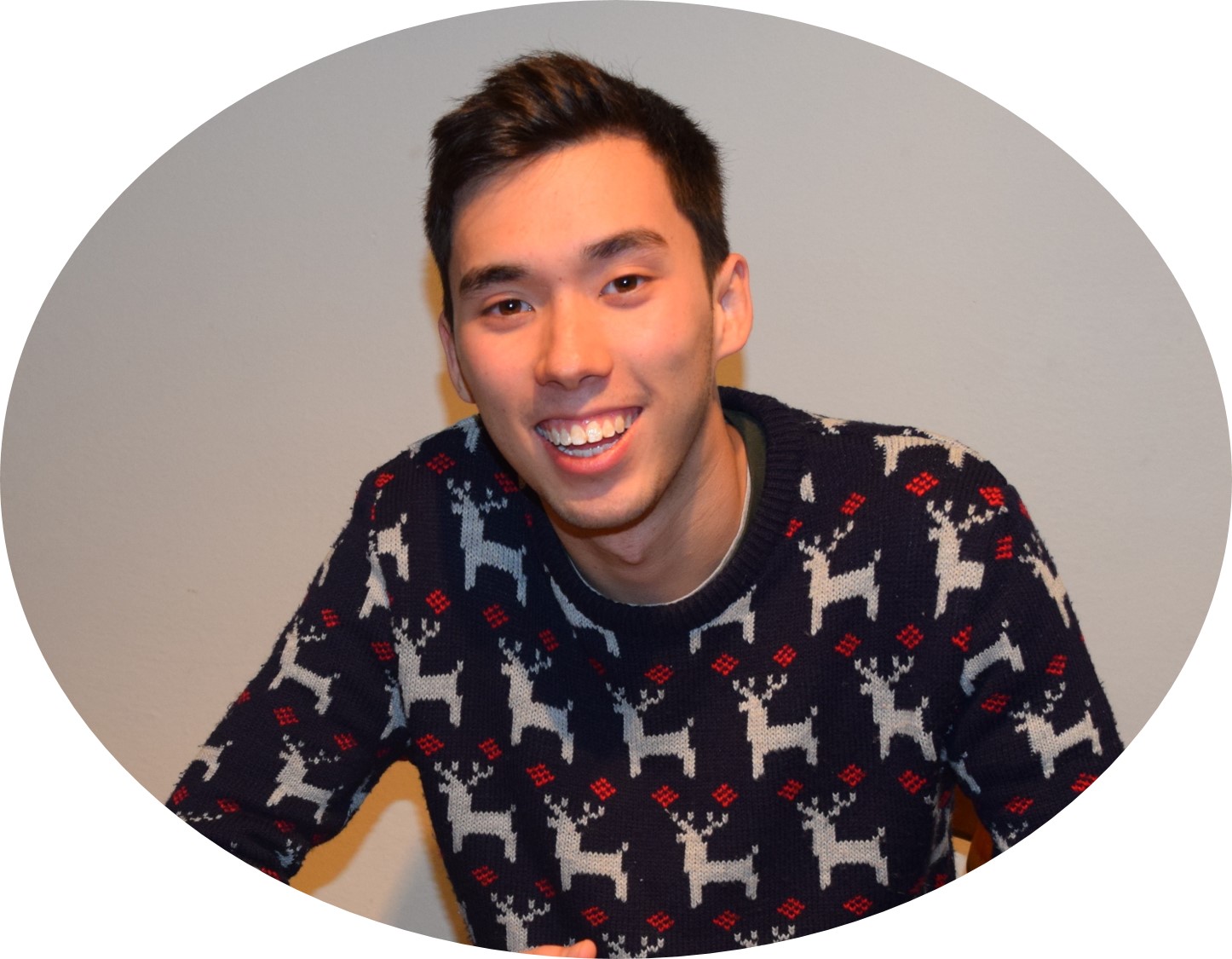 This is from Student Guide Students put tutor hats on to earn money Students are being...

While you may have given up on making New Year’s Resolutions after five failed attem...

Advice on entering the Sixth Form

Get 1 on 1 tutoring for AS and A Levels at MyTutor The transition from GCSE to AS Le...